“Aaron is definitely fluent in his skills and he just wants to communicate what's on his mind. He's taking us on a journey and he wants you to sit back and take it all in.” 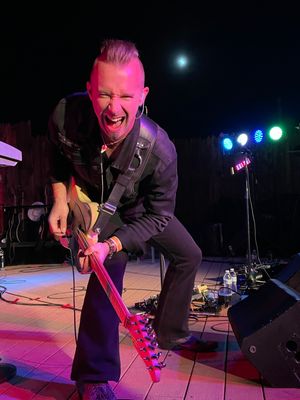 Of all instruments, the guitar is essential to singers, songwriters and musicians.  It has evolved over the course of time and is solidified as an essential element in a variety of musical genres. Producer and musician, Aaron Kusterer masters the guitar’s very essence, as its strings lay the foundation of his melodic messages.  With his blistering guitar riffs, and his powerful stage presence, audiences are buoyed by the high-energy and force of his meteoric talent.

Over the past 23 years, Aaron tells the history of his instrument through his musicianship.  Born in Missouri, Aaron began his musical journey under the tutelage of his parents. Beethoven, Bach, and possibly some Petra (thanks to his father) were the pillars upon which the Kusterer household was built. Aaron’s creativity and work shines a bright light on his musical influences, with the constant musical exposure from his musician parents. As a child of the 90s, it was an exciting time for music, but the call of the 80s resounded. Pinch harmonics, whammy bar tricks, and double-stop riffs make that authentic sound that has been finely tuned over the course of daily practicing, even to this day. Determination, repetition, and discipline make a musician. Being a working guitarist, though, requires the versatility to make stylistically appropriate musical decisions. Versatility is the difference between your college fraternity kid and making a living creating music. Therein lies the very thing that Aaron strives for daily; the ability to adapt to any musical situation at the highest level possible.

What separates the millions of musicians who write and perform music throughout the world? How about playing screaming ukulele 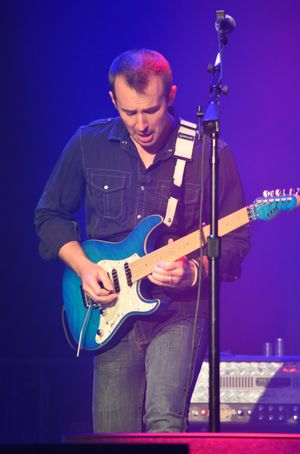 solos in front of thousands in Hawaii?! Or performing in front of the wife of the leader of the free world, former First Lady Michelle Obama?! Performing over 1000 shows for an impressive audience has attracted other well-known musicians to Aaron for collaborations. Working with the best is how to become the best, and Aaron Kusterer is no stranger to some of the greats. He has worked with Eddie Money, Mitch Malloy (solo artist, Great White) Jennifer Batten (Michael Jackson, Jeff Beck), Juanes, Danilo Perez, and more. In recent years, Aaron has utilized his experience to bolster a venture into song production, commercial music, and even the occasional film score. Artists such as Los Angeles-based pop singers, Natasha Remi and Tatiana Erse, have entrusted Aaron with their music due to his wealth of experience as a musician and unique outlook on the creation and execution of music. In addition to producing for other artists, Aaron has 2 instrumental guitar albums to his name and more recently has ventured into vocal work through a handful of singles available via streaming services.

In 2006, the United States Air Force provided Aaron a rare opportunity to perform music and lead scholar musicians. The US Air Force Band of Mid-America near St. Louis, Missouri and the US Air Force Band of the Pacific-Hawaii are two bands with very different cultures and regions where Staff Sergeant Aaron Kusterer left his mark. Military bands have a long tradition of entertaining the American public and promoting esprit de corps within the military. During his military career, he inspired the hearts and minds of men and women throughout a ten-state region in the United States and internationally throughout the Pacific, Middle East, and Central American regions. Supporting the US military and handling international 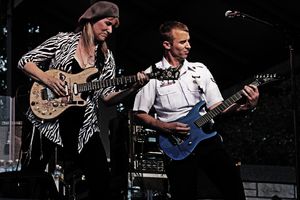 tours around the world is a fascinating job, only given to a few people in the world, and TSgt Kusterer has served his country withsteadfast dedication.

Currently, Aaron works in Los Angeles as a producer, hired gun, and music director for a wide variety of different groups and artists. He is also a musical director, guitarist, and tour manager for Twisted Gypsy, a Fleetwood Mac tribute show. When he isn't performing, he works out of his private studio on a variety of commercial and artist projects as a producer and engineer and runs Advantage Tour Management, a company dedicated to managing travel for entertainment professionals.

Every musician has a story, a pattern of events and influences that shape who they are. For Aaron Kusterer, the greatest part of his story is the element of dedication.  Dedication to music and to being the best.

If you would like me to provide a guitar track(s) or compositions for your project, please contact me at Aaron@aaronkusterer.com for rates. You can find samples of my work HERE on this site as well as on Soundcloud.